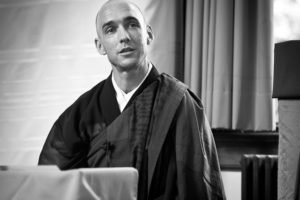 Fugan began Dharma practice in New Haven in 1986 with a Korean lineage Zen group. He did his first retreat with VZ in 2000, Jukai in July 2001, Tokudo in August 2004, Shuso in 2008. Fugan lives on Cape Cod with his partner, Seijin. They began Hyannis Zendo in 2009. Fugan holds a PhD in ethnomusicology from Wesleyan University (2015). He has been on the music faculty at Boston College since then, teaching courses on Indian, Asian, Brazilian, and World Musics. Fugan is also an active drummer and percussionist, performing in a wide range of styles. He has recorded and toured with artists in the US, South America, Europe, and in West Africa.